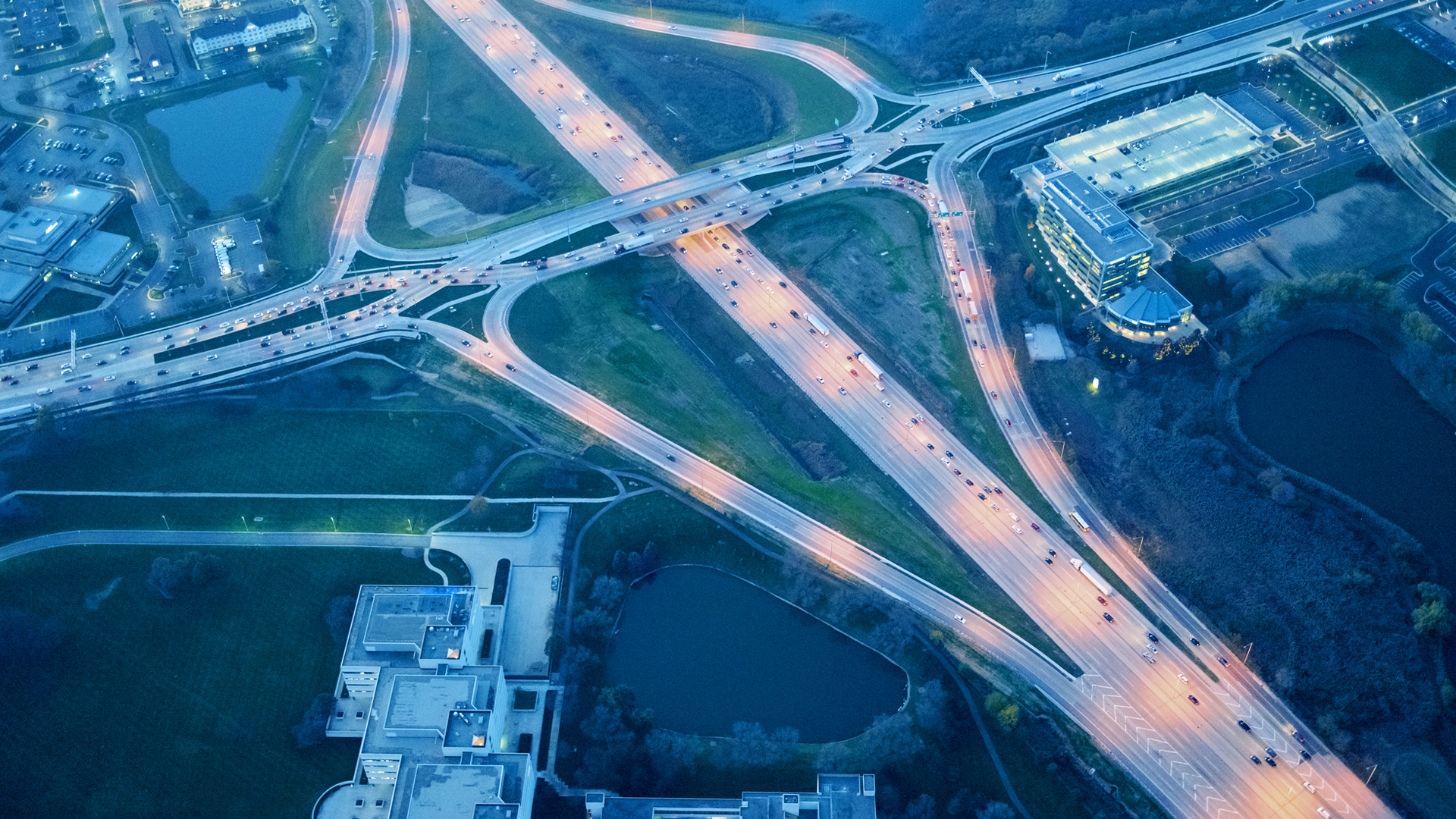 Decades ago, businesses and communities along I-88 reinvented the region as the Illinois Technology and Research Corridor. Now, new trends are once again transforming the area.

If you took a time machine back to the early 1960s, you probably wouldn’t recognize the I-88 E/W Corridor, the region that follows Interstate 88 through DuPage, Kane and DeKalb counties.

Today, the corridor is a busy economic center, home to the headquarters and regional offices of businesses representing a diverse range of industries—from aerospace and healthcare to transportation and manufacturing—as well as scientific institutions, colleges and universities.

It’s also a magnet for top talent. Communities within the region are known for their high quality of life, with excellent public schools, beautiful parks and trails, good neighborhoods and medical centers, as well as abundant shopping, dining and entertainment attractions. Thanks to its mix of high living standards, business-friendly climate and strategic location, the I-88 Corridor continues to attract and retain a diverse range of businesses and talented people.

But it wasn’t always this way. In fact, before the early 1960s, the corridor was hardly on the map.

At the time, there were certainly communities growing along I-88, but the scale of the region’s economy was much smaller and less diverse than it is today. It wasn’t the kind of place you would expect to find, say, a global tech company.

Since then, the I-88 Corridor has seen two major reinventions—first emerging as a leader of the tech boom in the 1980s and 1990s, and later evolving into a more diverse, dynamic economy.

To understand why the I-88 Corridor is undergoing its current evolution and where it might be heading in the near future, let’s take a quick look back at the people, the businesses and the phenomena that shaped the region’s economic history. 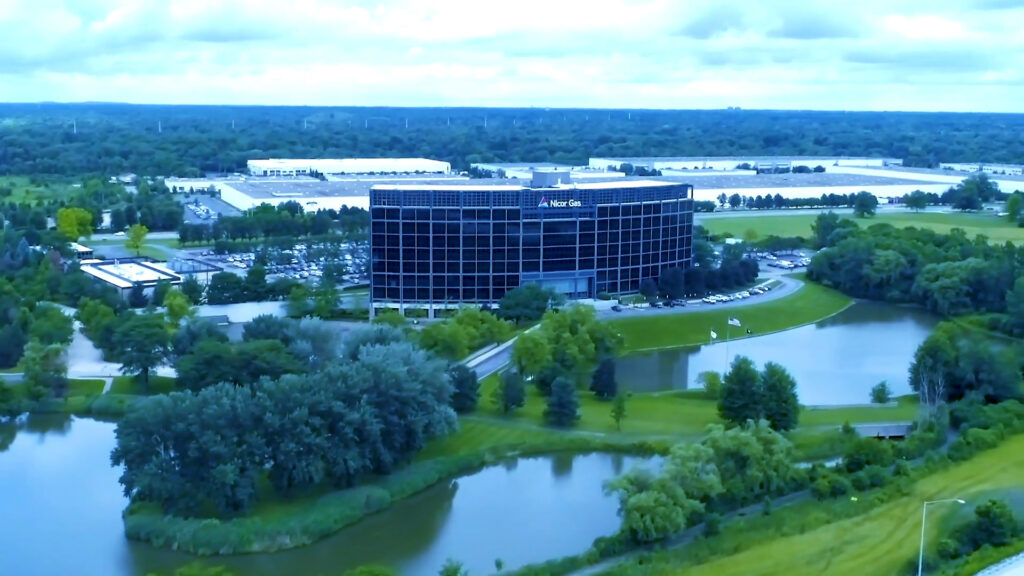 The I-88 Corridor began to change in 1963, when Northern Illinois Gas—now known as Nicor— moved to its current location in Naperville, just off Interstate 88. It was one of the first and largest technology companies to arrive in the area.

But that was just the beginning. Over the next four decades, from the 1960s through the 1990s, a tidal wave of major technology companies and research institutions moved to the region.

In 1966, AT&T Indian Hill Bell Labs—which later became Lucent Technologies—opened an R&D facility on a 200-acre site off Naperville & Warrenville roads, hosting 700 employees. This was followed by Fermilab, the National Accelerator Laboratory, which opened in Batavia in 1967; Amoco, an R&D-focused branch of Standard Oil Co., which moved to Naperville in 1969; and Nalco Chemical Company, a water-treatment purification business now owned by EcoLab, which opened its international headquarters in Naperville in 1986.

As these businesses and institutions arrived, they, along with the communities that hosted them, created a powerful economic ecosystem along the I-88 Corridor. Along with the towering corporate campuses came new shops, restaurants, parks, hospitals, schools and neighborhoods, serving the workforce and their families. Local investment increased. Businesses recruited talent from nearby colleges and universities, as well as from nations on the other side of the world. This created a positive feedback loop: as more talent moved in, the corridor became increasingly attractive to the rising tech industry; as more tech companies moved in and the local amenities improved, the region became increasingly attractive to talent.

Communities and companies competed—and often collaborated—to promote growth within the region. In 1982, an innovative public-private alliance formed, composed of more than 80 technology companies, national laboratories, and businesses in related industries, as well as colleges and universities. Together, they advocated for business-friendly policies—as well as infrastructure improvements, such as access to high-speed internet—that benefited companies within the area.

“One issue we worked on was the impact fees (payments meant to offset the cost of public services) the counties were imposing on developers,” says Ron Lunt, Partner at Hamilton Partners and a member of the corridor group. “When local governments did approve them, they were at a lower level than they would have been, if we hadn’t advocated for businesses.”

For decades, businesses and communities worked together to reinvent the I-88 Corridor as a global hub for research and technology, the midwestern equivalent of Silicon Valley. And they largely succeeded, attracting the corporate headquarters and regional centers of many Fortune 1000 companies.

Unfortunately, the industry on which they had built their economy was about to come crashing down. 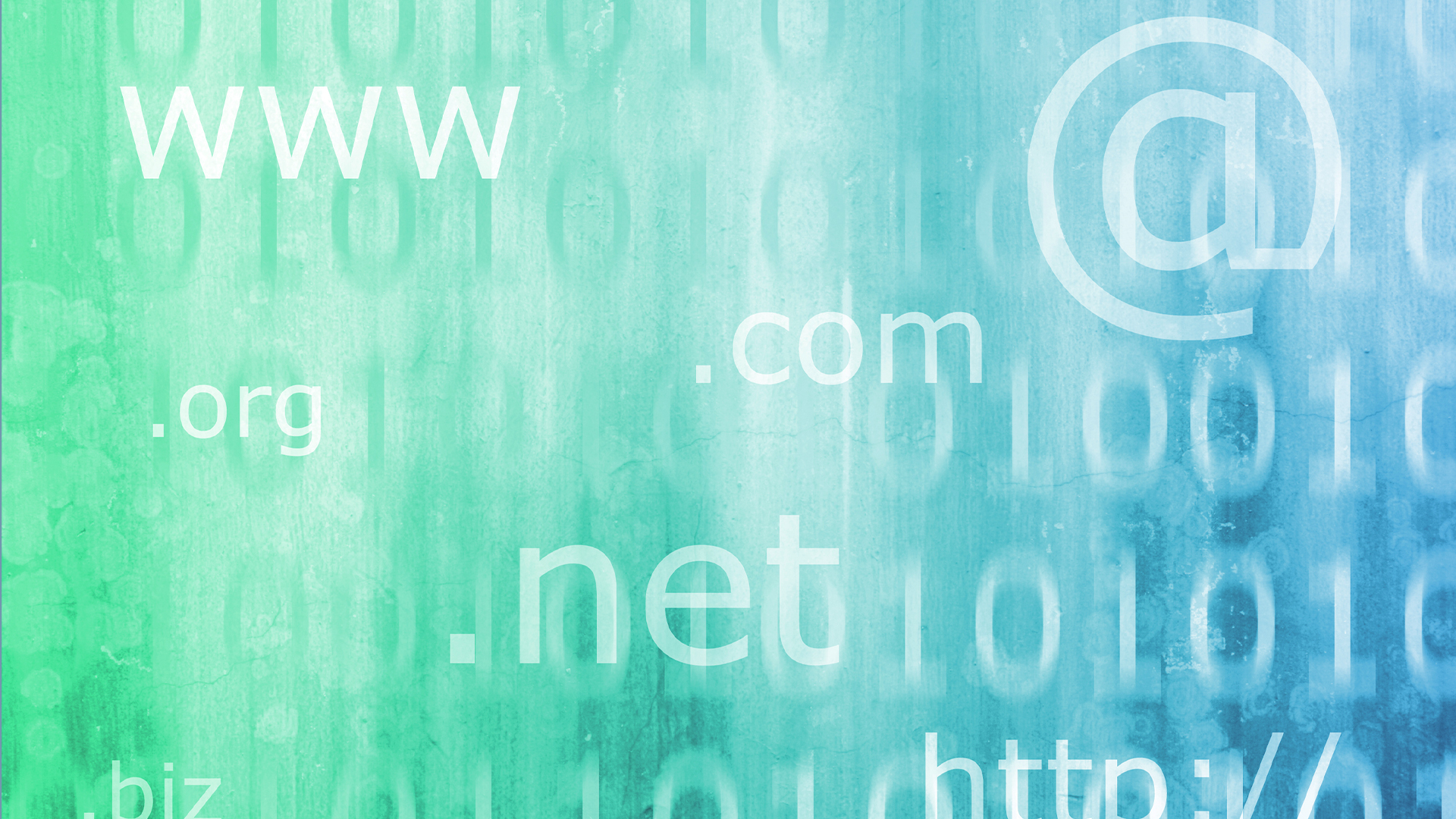 The dot-com bubble (or tech bubble) refers to the massive inflation of the stock market in the 1990s. Investors bet big on hot internet-related businesses, and the market’s value skyrocketed.

In 2000, the bubble burst, sending the stock market into free fall. This devastated the tech industry and nearly toppled industry giants like Cisco and Amazon. It was immediately followed by the telecoms crash, which brought down many more telecommunications companies, including some of the businesses along the I-88 Corridor.

Today, most people no longer refer to the I-88 region as the Illinois Research and Technology Corridor. In part, that’s because many of the companies that earned the region its nickname left the area following the burst of the dotcom bubble and the telecom crash (and more left following the Great Recession in 2008).

One of those companies was Lucent Technologies, one of the corridor’s premier tenants. When the bubble burst, Nokia absorbed the company and pulled Lucent out of Naperville, abandoning a two-building, 175-acre campus. 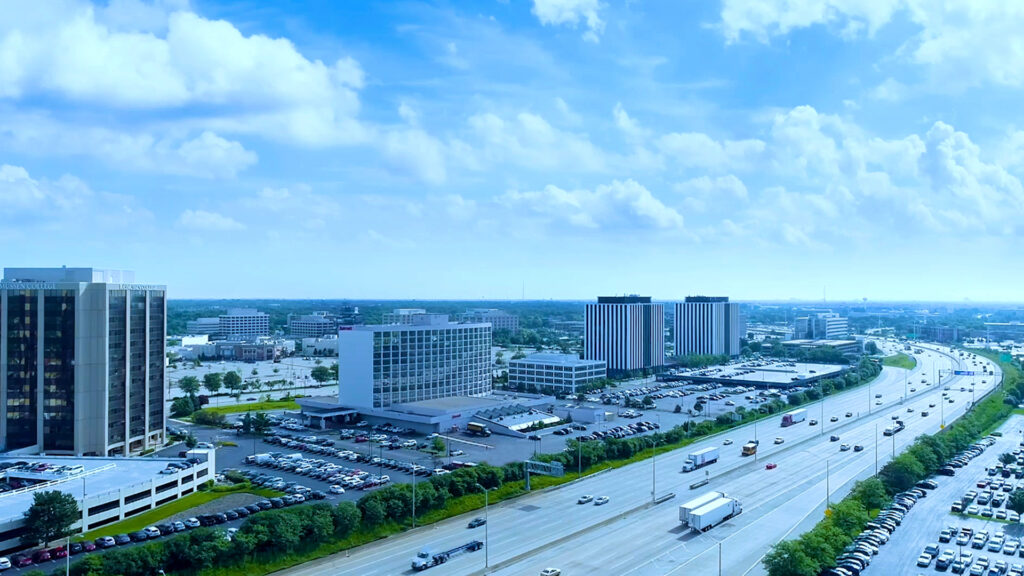 Another reason why the label “Research and Technology Corridor” is no longer relevant is because, over the last two decades, the region’s economy has undergone drastic changes.

“In the ‘90s, we were too heavily reliant on tech,” said Christine Jeffries, President of the Naperville Development Partnership, in an interview with Bisnow. “After that we made it a point to diversify.”

“Prior to the bubble, this region was widely promoted to the rising technology industry,” said Jim Adler, Executive Vice President of NAI Hiffman. “However, when the bubble burst, a lot of those technology buildings turned over and were released and rebranded to other users.”

What was once a region narrowly focused on a single booming industry has, over the last two decades, greatly diversified its economic makeup. There are still many research institutions and technology companies in the area, but today’s I-88 Corridor hosts a much wider range of industries, with an emphasis on niches like aerospace, healthcare, transportation and manufacturing.

Many of these companies are now claiming the spaces vacated by giant tech businesses in the 2000s—as well as tenants like OfficeMax, Motorola Solutions and McDonald’s, which left in the 2010s—transforming these giant single-user spaces into multi-tenant, mixed-use campuses. The new spaces are designed to serve a wider variety of users and feature on-campus and nearby amenities that appeal to today’s workforce. What was once only possible in the city—working in a space where community parks and high-end restaurants are right outside the office—is increasingly the norm in the suburbs.

One example is The Shuman in Naperville. Originally built for AT&T in 1987, the 350,000 SF facility became OfficeMax’s headquarters following the telecoms crash. In 2014, OfficeMax left, and the building was later purchased by Franklin Partners. Now, The Shuman has been redesigned as a sleek, multi-tenant space. A far cry from the corporate buildings of the 1980s, the redesigned facility features open collaboration spaces, an in-house barista bar, a restaurant that offers a rotating selection from Chicagoland restaurants, and other amenities you would normally expect to find in a Class-A downtown high-rise.

“Now on its third life, The Shuman’s a great example of what’s happening to many buildings in the I-88 Corridor,” Adler said. “Every company is thinking about how they can position their building to attract the sophisticated, young employee. And it’s all about amenities.

“We’re seeing investments in common spaces like we’ve never seen before. Some buildings, like the Commerce Plaza in Oak Brook, are investing in outdoor workspaces. Since the pandemic, those are the buildings that are thriving.”

Not your father’s corridor 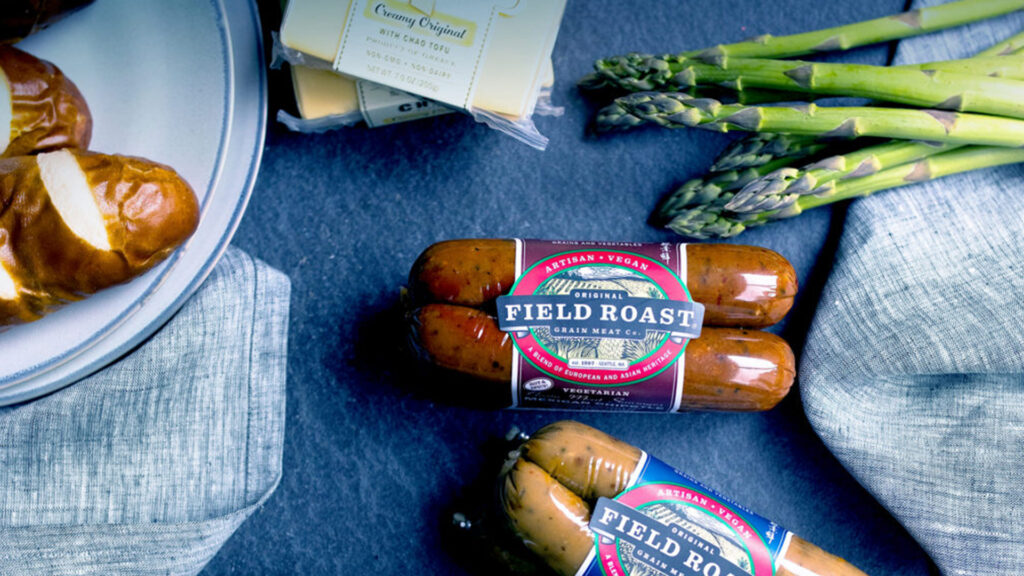 It’s hard to put a catchy label on today’s I-88 Corridor.

The old label—the Illinois Technology and Research Corridor—doesn’t quite fit. Yes, the region is still home to some of today’s leading technology companies and research institutions, but it’s more complicated than that.

For one, there’s no longer The Tech Industry, not like there was in the 1980s. The lines have blurred. Today, healthcare is a tech industry. Food is a tech industry. Logistics, transportation, communications—they’re all tech industries. When you consider how digital technology has transformed—and been transformed by—nearly every industry, you would be hard-pressed to find someone who doesn’t work in tech.

The technology companies of today represent a far wider set of industries and sub-industries, disciplines and skillsets, than the narrow field of the 1980s. And that broad spectrum of sectors forms the economic basis of the region today.

“Historically, the I-88 Corridor focused on attracting the tech industry,” Adler said. “Today, technology is inherent to every business. So we still want to attract tech, but it’s tech talent that’s working for businesses like Greenleaf Foods, Hub Group, and Rush Copley, across all kinds of industries.”

Just take a look at some of the most recent projects in the I-88 Corridor. In February 2021, STRATACACHE—a company that makes digital signage, intelligent displays and sensors—announced a 100,000-square-foot facility in Lisle, which will house their research and support teams. Greenleaf Foods, SPC, the maker of plant-based foods, is housing their new innovation center at a 23,000-square-foot facility in Lisle. viaPHOTON, a fiber-optics manufacturer, is bringing 200 jobs to Aurora, while XPO Logistics—a top-ten global logistics provider—is leasing a 50,000-square-foot space at The Shuman. This is the new economy, and you can see why it’s hard to define in one or two words.

By its nature, today’s I-88 Corridor shakes off most labels you throw at it. It’s a region that’s defined by change: Its economy is diverse and dynamic, its businesses are at the cutting edge of their respective industries, its national laboratories (Argonne and Fermilab) are leading the world in research on topics ranging from infectious diseases and supercomputing to the origins of the universe. Even the local culture is undergoing a major reinvention, as the sprawling suburban office campuses of the past become lively hubs for a mix of business, life, art and entertainment.

This isn’t the I-88 Corridor of the 1960s, the 1980s, or even the 2000s—this is a place where diversity forms the basis of a more resilient economy, continual change is a way of life, and innovation is in the DNA of every business, household and main street.

Take a look at today’s I-88 Corridor, and you’ll find a place that’s no longer just a hub for one or two industries. And that’s a good thing. It’s so much more.