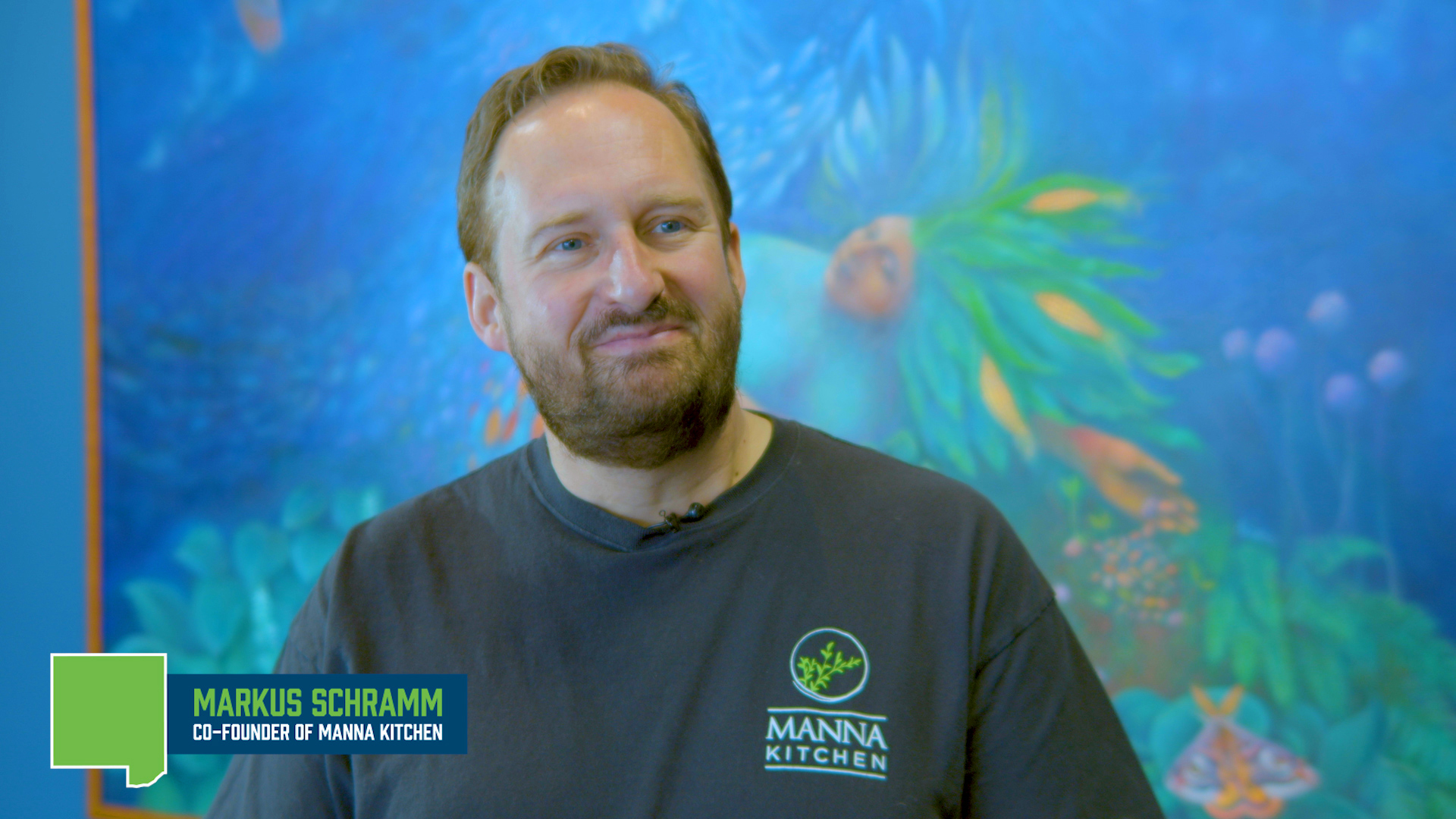 LISLE, IL—The Village of Lisle couldn’t be much farther from the Bavarian countryside. But when Markus Schramm first visited the DuPage County suburb—as a tourist in 1992 and as an intern the following year—he felt right at home.

“I grew up on the outskirts of the Alps,” Markus says. “When I first visited Lisle, I was struck by how natural the surroundings are, with so many forest preserves. I also like the small-town feel. You really have a personal connection with your neighbors.

“I know this sounds strange, because I came from a completely different country, but Lisle immediately felt like home.”

Today, the Schramm family owns and operates two businesses in Lisle: Manna Organics and Manna Kitchen. In 2008, Markus and his wife, Shanti, founded Manna Organics, their first business, after purchasing a bread-baking division from a Canadian company. They moved the commercial bakery to Lisle, where they continue to operate today. The business remains small, with eight employees, but Manna Organics distributes to Whole Foods and various independent stores and co-ops nationwide. 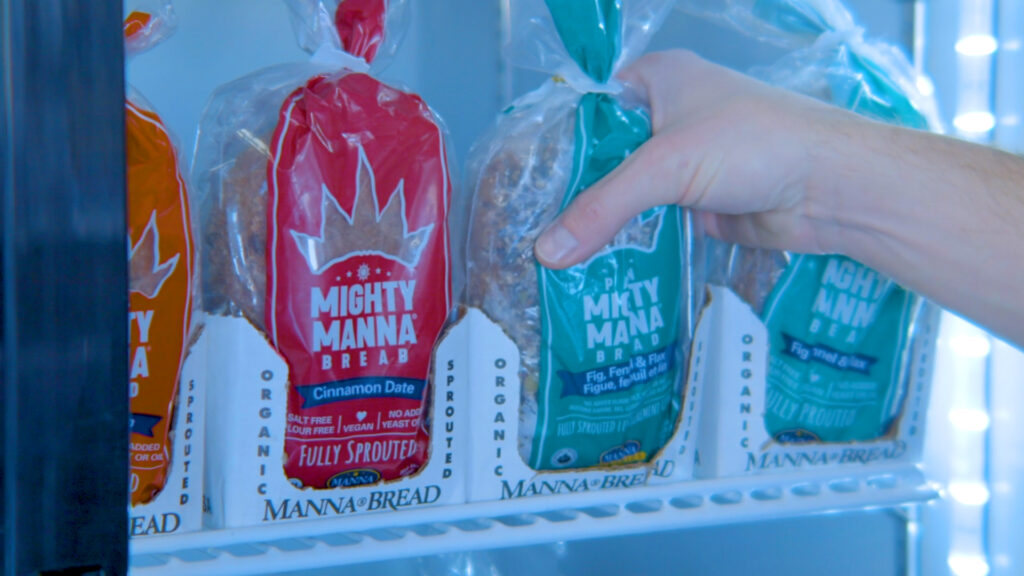 In 2019, the Schramms opened a restaurant across the street from their Lisle bakery. Manna Kitchen—“Manna” is an ancient hermetic word meaning “from above”—is something of a pioneer. While Chicago has been home to plant-based restaurants for years, Manna Kitchen is the first diner in the western suburbs to exclusively serve vegan food.

That’s not to say that plant-based foods haven’t had a presence in the burbs. In fact, for more than a decade, Lisle itself has been home to Veggie Fest, an annual festival that draws tens of thousands of visitors to celebrate all things vegetable. For years, Manna Organics was a vendor at Veggie Fest. It was there that Markus and Shanti were inspired to go into the restaurant business.

“Everyone who lived in the area was telling us: We need a vegan or vegetarian restaurant out here,” Markus says. “But nobody would do it. I asked the owners of a few places in downtown Chicago, like the Chicago Diner and the Veggie Grill, but no one was interested in coming to the suburbs.” 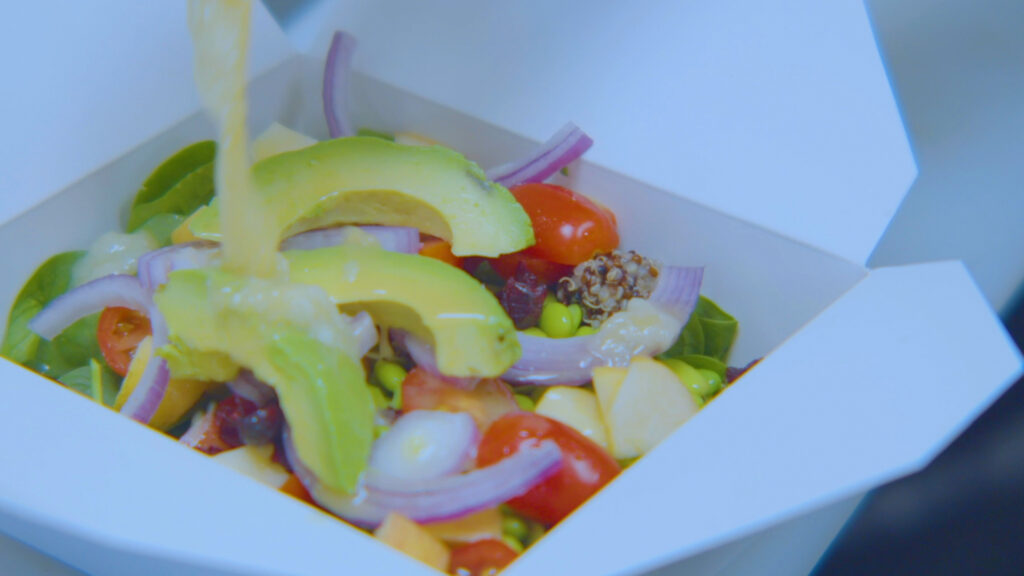 Markus, who is vegetarian, and Shanti, a fifth-generation vegan, were themselves frustrated with the lack of plant-based dining in the suburbs. Sure, a few restaurants were serving Beyond Burgers, and some of the markets were carrying plant-based options. But, if the couple wanted a restaurant that exclusively catered to their diet, they had to drive to the city.

As Markus and Shanti began talking to people at Veggie Fest and consulting with their neighbors, they began to suspect that there was a growing demand for plant-based dining in DuPage County. In the past, many restauranteurs assumed there wasn’t enough interest in the suburbs to support a vegan diner. But the Schramms suspected that DuPage was on the verge of a plant-based renaissance.

When their kids went off to college, the Schramms got to work, creating the kind of restaurant where they would love to dine. Manna Kitchen opened November 5th, 2019.

Just in time for the pandemic. 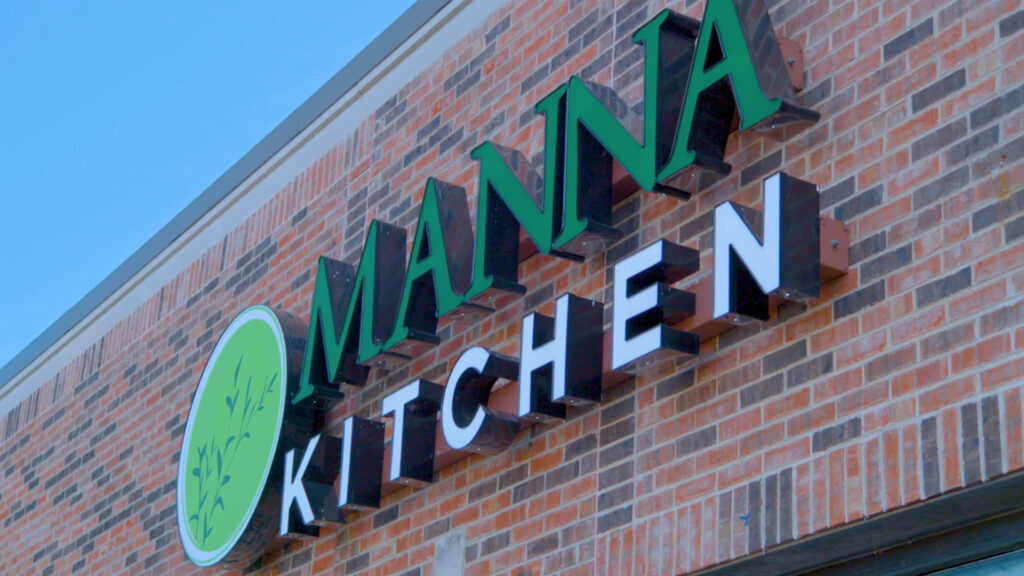 A Pioneer in a Pandemic

For the first few months after opening their doors, things went pretty smoothly for Manna Kitchen. As the Schramms predicted, DuPage indeed had a craving for plant-based protein. Despite limited marketing, Manna Kitchen quickly cultivated a loyal customer base, and their dining rooms began to fill.

And then, in March, the Governor ordered a statewide shutdown of all indoor dining—among other things—in an attempt to limit the spread of COVID-19. Within the first month, the Kitchen’s business dropped by 83 percent.

Under government orders, delivery and takeout were still permitted. At first, the Schramms attempted to deliver their own food. That didn’t work out. “We quickly learned that’s not our core competency,” Markus says. Later, the family signed up for third-party delivery services like GrubHub and DoorDash, and orders began flowing in. As the pandemic dragged on, a small but loyal customer base rallied around the business.

“We had people who would normally visit every other week; they were suddenly here two, three times a week, getting takeout and buying gift cards. That really helped.”

Thanks to a loyal customer base, smart decisions and the steady income from their commercial bakery, the Schramm family has kept Manna Kitchen afloat. Markus, whom we interviewed during Illinois’ second shutdown, in the early winter, says they were more-prepared for the second round—as prepared as any business can be. 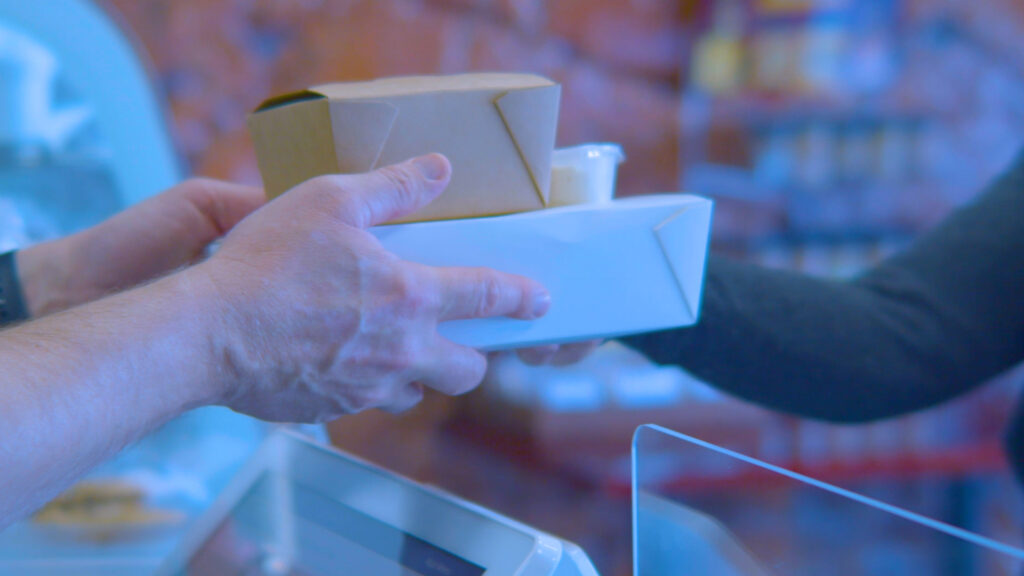 Food and the Future

Markus is German-American, but the meals at Manna Kitchen are inspired by comfort-food traditions from across the globe. Here, you’ll find Mongolian stir-fry, southern soul food, crispy crab cakes, spicy tacos, Greek salads, chorizo burritos—and, of course, a Schnitzel platter, served with German potato salad. Every bite of every dish is 100% vegan.

While the menu will obviously appeal to vegans and vegetarians, Markus says that it’s also for those of us who merely dabble in meatless dining. Maybe you’ve been reading about the environmental impact of meat production, or you just watched a documentary on animal welfare, or you’re simply feeling veggie-curious. Schramm says the restaurant’s menu appeals to taste buds of all varieties—even if you’re just looking for a good burger.

While Markus’ is the first plant-based restaurant in the western suburbs, he suspects that it won’t be the last. He hopes that his own business will grow—enough that he can open one or two more locations—as he predicts that the market for plant-based foods is poised to skyrocket. If his predictions come true, Markus says that dozens of plant-based restaurants will open in the suburbs.

Today, Manna Kitchen is the only plant-based restaurant in the western suburbs, but it isn’t the only plant-based business. Just a few minutes away—also in Lisle—Greenleaf foods produces some of the nation’s leading plant-based brands, such as Lightlife® and Field Roast. (Their innovation center is in Lisle. Their headquarters is in nearby Elmhurst, also in DuPage.) 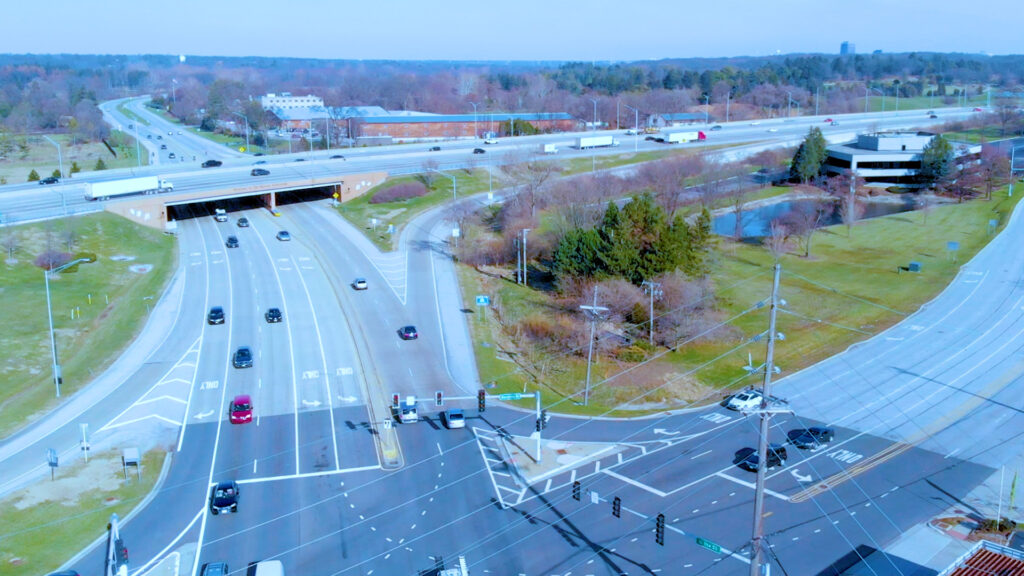 “Our innovation center in Lisle is centrally located near our corporate office and O’Hare, making it convenient for our customers and associates to visit,” says Dan Curtin, President of Greenleaf Foods.

“I see Lisle as the hidden gem of the western suburbs, with its direct access off 355, as well as the Train Overpass reducing congestion in the downtown and allowing for higher traffic flow,” says Rob Salerno, the restauranteur responsible for Chicagoland’s Evviva! Bar & Eatery and R. Urban Wine Bar & Café restaurants. “With proper planning and execution, Lisle has great opportunities for developers, businesses and residents.”

“On behalf of our community, I’m excited to see what tomorrow brings,” says Lisle Mayor Christopher Pecak. “I see a bright future as we honor the past, build on what we’ve learned, and make space for new ideas and opportunities.”

What does the future have in store for Lisle, Manna Kitchen and the Schramm family? No one really knows. But it is worth noting that this small, brand-new business has managed to survive a pandemic and an economic shutdown, largely thanks to the support of the community. A good sign of things to come? Perhaps.

While Markus can’t see the future any more than the rest of us, he says that we all have a part to play.

“As the human family, I think we have an obligation not only to look after ourselves or those in our immediate family. Instead, look a little further out there. Look to your neighbors and say, ‘Hey, how are you doing? Is there anything I can do for you?’ If each of us does this on a small scale, that kindness will carry forward, and I think we’ll all be better off.”

Watch the interview with Markus Schramm below.

Lisle is a community in DuPage County, Illinois. Like Lisle, communities across DuPage have rallied to support local businesses, protect the health of residents and visitors, and even use science to fight back against COVID-19.