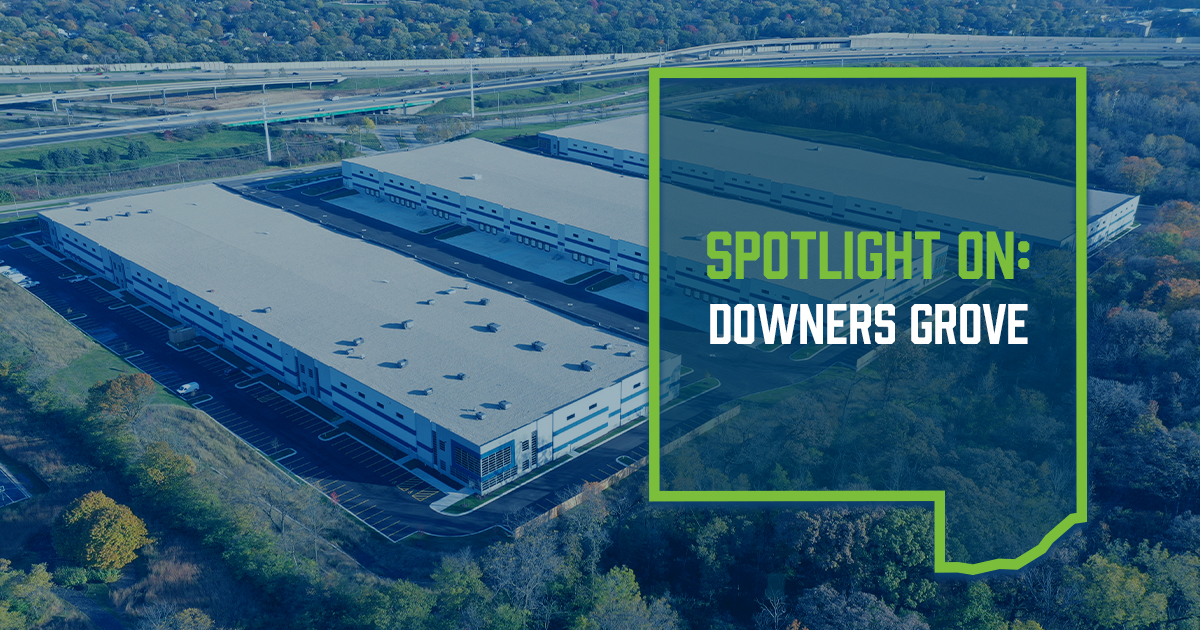 Celebrating more than 15 years of the Downers Grove Economic Development Corporation, we look back at the values that built Downers Grove and continue to define it today.

It all started with the ox.

In 1835, three years after the area’s first settler arrived in what would become Downers Grove, Pierce Downer set out to build a trail. He wasn’t alone. Since arriving, he had been joined by Israel Blodgett and Samuel Curtiss, a pair of settlers who purchased nearby land – at a cool $1.25/acre – where they established a farm and a blacksmith shop.

That morning, the men gathered in the forest to lead a team of oxen. The animals were strapped to a giant log. As they pulled it forward, the log slowly transformed the trail, flattening and widening it. By the time their work was finished, the homesteaders had built a new trail linking their properties to another path: a main thoroughfare that ran from Naper Settlement (Naperville) all the way to Chicago. Things would never be the same.

At the time, it may not have looked like much – a handful of men and oxen dragging a log through the forest – but by building this trail, the settlers connected their tiny village to the rest of the region, laying the groundwork for more people and businesses to move to the community. It was a strategic move.

It was also the area’s very first collaborative economic-development project—though far from the last.

“Collaboration and strategic planning are at the heart of good economic development,” says Michael Cassa, President and CEO of the Downers Grove Economic Development Corporation (DGEDC). The organization, a public-private collaboration that spearheads efforts to attract and retain businesses in Downers Grove, celebrated its 15th year in 2021.

“The most sustainable and meaningful growth occurs when you have everyone – from both the private and public sectors – moving in the same direction, working to realize a collective vision. We help establish that vision and guide the community towards it.”

The DGEDC is the culmination of a long history of collaboration and strategic planning in Downers Grove. Years after Pierce and his fellow settlers built their new trail, the people of Downers Grove would once again work together – along with leaders of surrounding communities – to lobby the Burlington Railroad Company to build a railroad from Chicago to Aurora. Opened in 1864, the railroad spurred further population growth, as well as the area’s first industrial operations.

In the decades that followed, the public and private leaders of Downers Grove continued to lobby on behalf of their community and guide the area through times of transition.

In the mid-twentieth century, a pair of major tollways were constructed along the village’s northern and western boundaries: a highway in 1958 that would later become I-88, along with I-355 in 1989. 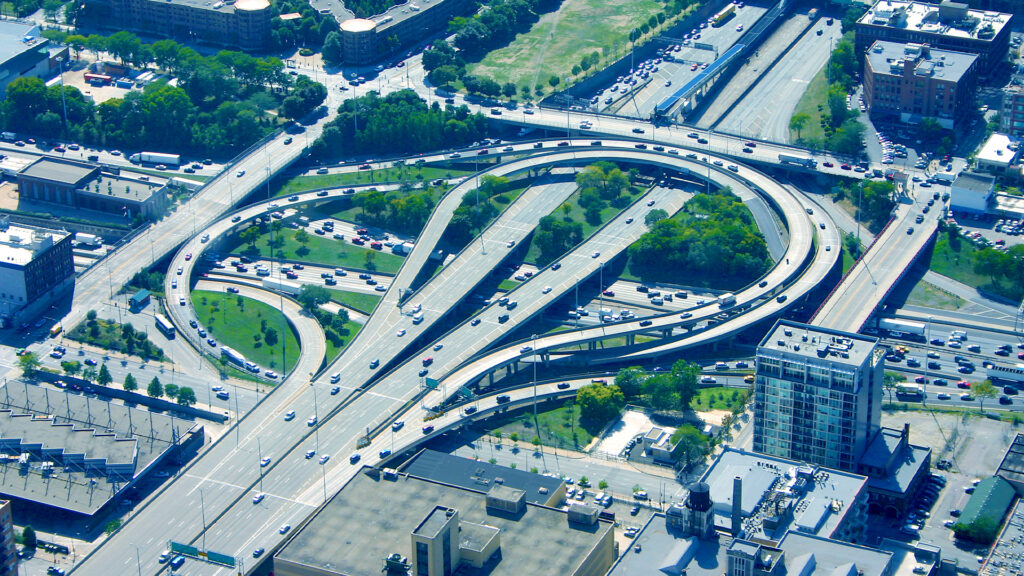 Much like the railroad, these tollways caused major economic expansion in the community. But it was the strategic planning of local business leaders and public officials that made this growth smart, sustainable, and beneficial to the various stakeholders of Downers Grove—residents, visitors, workers and businesses alike.

Then, in 2006, a group of community leaders founded the Downers Grove Economic Development Corporation. A spiritual successor to the many collaborations that transformed Downers Grove from a sleepy village to the diverse and thriving economy it is today, the DGEDC brought together public and private leaders to work collaboratively and strategically.

It couldn’t have come at a better time. In the 2000s, market trends were shifting, e-commerce was rising, and the global economy was entering a new age of volatility. It was time to work together and think strategically.

Today, one of the DGEDC’s biggest responsibilities is guiding Downers Grove through the economic changes occurring both within and beyond its borders.

Nowhere is there a faster and more dramatic transformation than in the retail market.

Driven by shifting consumer trends and the rise of e-commerce, retailers are hungry for strategic locations for their distribution centers and warehouses. They need locations that are close to their customers, close to a good workforce, and close to a solid transportation network.

Downers Grove hits all three marks. The community is located within a 30-minute drive (or a quick train ride) of 1.4 million qualified workers. Thanks to the two major tollways that border Downers Grove, goods can be quickly and efficiently shipped to customers anywhere in the Chicago region or beyond.

Much like the groups that lobbied for the railroad in the 19th century and capitalized on the new highways of the 20th, the DGEDC works to identify opportunities for businesses to build or expand in Downers Grove, then promotes the community’s advantages to target companies. They also work with the Village of Downers Grove to attract these businesses through incentive programs and infrastructure investments. Meanwhile, the group coordinates the many active projects within Downers Grove to ensure that each one fits into the big picture—the community’s vision for the future.

The impact of DGEDC’s work is three-fold:

First, you have stories like Bridge Point Downers Grove. The development, which now features three buildings with more than 100 docks and nearly 700 parking spaces, is now home to two Amazon warehouses, as well as a Cooper’s Hawk Winery distribution center.

Today, the location seems like an obvious fit for distribution. It’s just over a mile from I-355 and three miles from I-88. That means distributors can quickly and efficiently get their products to customers, and e-commerce retailers can deliver time-sensitive services like one-day shipping.

“When we began seeing these new trends in industrial real estate and e-commerce, we realized that Downers Grove was in the perfect location,” says Nick Siegel, a Partner at Bridge Industrial, which developed Bridge Point Downers Grove as a joint venture with Banner Oak Capital Partners.

“Here, our tenants have the transportation network, the workforce, the diverse economy, and a community they really love.”

And yet, only a few years ago, the site was a vacant, 74-acre plot with a functionally useless facility. It was only through the collaboration of public and private leaders that the site was identified as a prime location for e-commerce retailers and others, then marketed to developers and potential tenants. DGEDC and the Village saw the site’s potential, they saw how it fit into the big picture, and they worked together to bring it to life.

Bridge Point’s story mirrors other e-commerce-related developments happening in Downers Grove, many of them impacted by the collaborative work of the DGEDC and the Village of Downers Grove. In addition to Bridge Point, Downers Grove has welcomed a number of new distribution centers – ranging from 24,000 to 170,000 square-feet – for businesses like Bridge Industrial, Remedi Senior Care, Thyssen Krupp and Green Bay Packaging, among others. Behind each of these developments, there’s a story of collaboration. 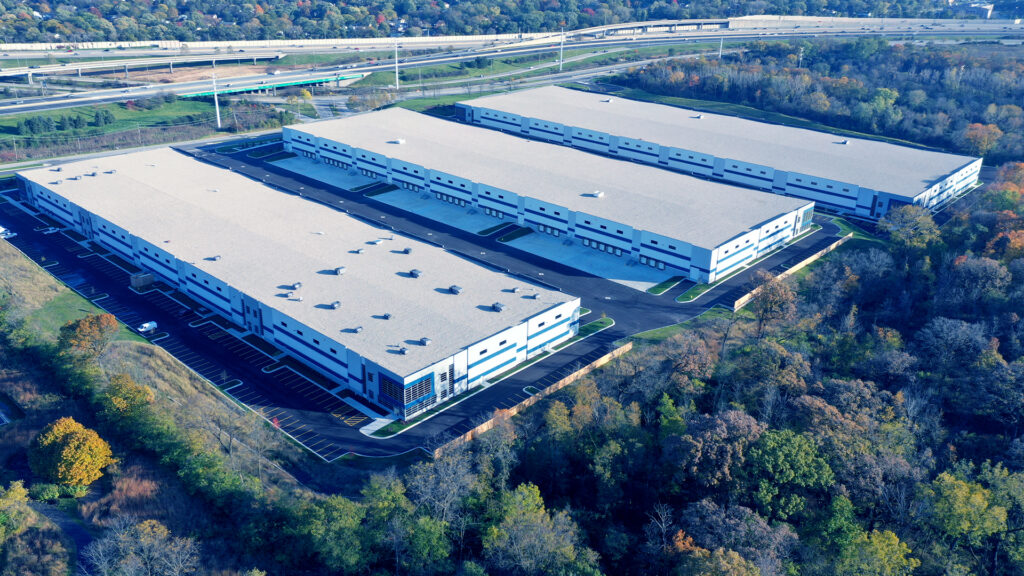 But the story of Downers Grove and the DGEDC is bigger than any one industry—even one as impactful as online retail.

Historically, the community has been defined by a large, diverse group of small and mid-sized businesses. (That includes brick and mortar retail, which, although evolving, continues to account for more than 80% of all U.S. retail sales.) Since the development of the tollways that border Downers Grove, the community has welcomed a number of corporate headquarters and regional offices, from Rexnord Corporation, which recently completed their new 248,000-square-foot manufacturing facility and Aerospace Division Headquarters in Ellsworth Business Park, to Flavorchem, which just opened a 25,000-square-foot innovation center at Oak Grove Commons Business Park.

While newer markets are key to the area’s growth, it’s the legacy industries and businesses that form the basis of its diversity and resiliency. A central part of the DGEDC’s mission is to support these businesses by lobbying on their behalf, marketing them to visitors, helping coordinate expansion and new investment, and promoting business-friendly policies, such as the community’s historically low commercial taxes.

Finally, there’s downtown Downers Grove—an area that’s critical to the community’s appeal to residents, visitors and businesses. Over the last few decades, the Village and the DGEDC have spurred investment in the area through promotion and innovative programs. In 1997, the Village established a Tax Increment Financing (TIF) district in the downtown area. (A TIF allows a government to invest in public infrastructure and other improvements up front, then pay for them later with tax revenue generated by the project.) The program resulted in $48M in public improvements and, over the same period, $161M in private investment.

As the Village and the DGEDC led efforts to promote the downtown’s revitalization, the area saw a wave of new multi-family residential developments—including Opus Development, a new apartment complex that will soon break ground in downtown Downers Grove. Meanwhile, a mix of new restaurants and shops have sprung up: Bar Chido, Cadence Kitchen, The Foxtail, Gia Mia, Pierce Tavern and Wasabi, to name a few. During the height of the COVID-19 pandemic, the DGEDC played a critical role in supporting businesses like these and connecting them to key resources.

As you can see, much of the work of the DGEDC is about the future: the future of the community’s businesses, its historic downtown, its visitors and residents, and its position in the world of e-commerce.

At the same time, the values that guide the community today are the very same ones that drove its first settlers to build that trail all those years ago.

“Of course no one knows exactly what the future will bring,” says Cassa. “But I can tell you that we will build our best future so long as we continue to work together and think strategically.

“In Downers Grove, that’s what we’ve always been about.”

Since 2006, the Downers Grove Economic Development Corporation has spearheaded efforts in the village to attract new businesses and developers, while retaining legacy businesses and expanding promising developments. As the community continues to grow and transform, the DGEDC board orchestrates public-private collaboration, helps businesses navigate change, promotes business-friendly policies, and coordinates the smart, sustainable growth of the diverse Downers Grove economy.

Learn more about the organization here.